Local Government has traditionally been bound by restrictive budgets and competing IT priorities. Bad actors have notoriously targeted cities disrupting services, supplies and communication while demanding large ransoms.   Municipalities and city government systems impact the health, welfare, and even lives of the citizens in the area they serve. This gives municipalities extra incentive to simply pay whatever hackers are demanding to get these mission-critical systems back online as soon as possible. In response to this, we have designed CloudJacketX which addresses the security needs of local government without burdening their IT staff with alerts, making it affordable and effective. 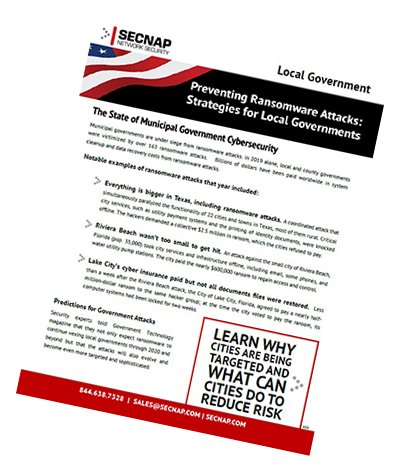 Get the Ransomware Mitigation Checklist

CloudJacketX, our flexible security-as-a-service platform allows for a layered approach where you can choose exactly what your organization needs. Our U.S.-based Security Operations Center will manage and monitor all CloudJacketX platform layers 24/7 eliminating the hidden costs.